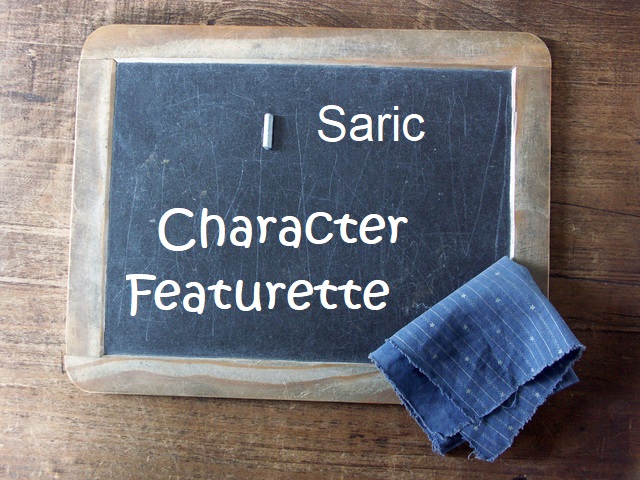 Saric is an Arathian who was assigned to the Adastra when it rescued a crashing Earther plane. A trained medic, he was a first responder to help the injured passengers.

Now living on Aeonas, he’s known throughout the colony as a tech junkie. Day to day he runs the replicator, but also repairs anything with circuitry.

He’s been happily mated to Duran for 5 years, and loves his mate dearly… even if the male can be stubborn and anti-social sometimes. Saric helps keep him balanced and from retreating inside himself. He would do anything for his mate… agree to anything in order to keep him in his life. That includes agreeing to not include a female in their relationship. He was fine with their arrangement, knowing that Duran had good reason to ask that of him, but meeting Adrianna has changed all of that. She’s changed everything. And now Saric isn’t sure he can ever be completely whole again without the female Earther.

I felt as though I was walking a tightrope as I wrote Saric’s character. He’s balancing his relationship with Duran, and the feelings he has for Adi, knowing that he long-ago agreed to not bring a female into their lives. He has a measure of guilt about his feelings for her, but finally realizes that he can’t help it; he needs them both, and knows that the three of them would make magic together.

He must now begin the most important mission of his life: convincing Duran, the male he loves, that she’s worth breaking their promise to one another.