Alien Savior’s new edition released last week, and one of the changes I made to the book was giving it a new cover! In keeping with tradition, I’d like to show you its evolution.

A.Savior’s new cover wasn’t as demanding as many of my previous ones. Cindy, my digital design guru, didn’t have to make anyone blue, or hand-paint golden tattoos onto anyone’s skin, BUT she did have a few changes to make.

Just to remind you all, here’s A.Savior’s previous cover:

As always, my covers begin with a concept and finding models. These are the three mock-ups that Cindy sent me: 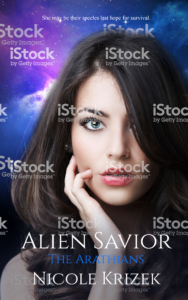 <==  This model was beautiful and matched Lacy’s description (young caucasian with brown hair and blue eyes), but I wasn’t sure about my cover having only one person, especially since this book is a menage. I like potential readers to know that there are more than 2 characters with a single glance. I thought that this was especially important with A.Savior since it’s the first novel in the series. 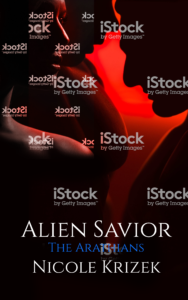 ==> I honestly didn’t like this cover very much, so it was never in the running. 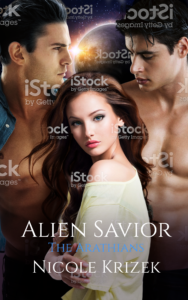 <== I liked this one right away! The female model matched Lacy, the males were handsome, had dark hair and tan skin, and the three of them fit well together.

It was a simple choice- the 3rd option was the definite winner! As a bonus, I knew that Cindy would have an easier time Photoshopping the images- the main thing was that the males needed to have long hair. I bought the four raw images (including the background image, which doubled for the back cover), while Cindy continued to work.

This is the next image she sent me: 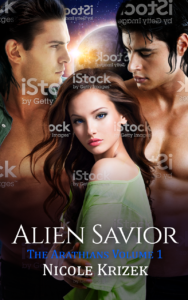 It was hard for me to tell her (because I didn’t want to hurt her feelings), but I hated the males’ hair! The one on the left looks like he has a mullet, and the one on the right looks greasy. I asked her to try again and to also erase the white button on the man’s shirt. To me, it screamed “Earther denim!” 🙂

She took another stab at it and created what would become our final cover image: 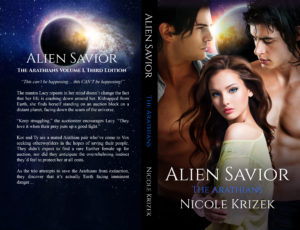 I’m incredibly happy with how the project turned out and hope that you’d agree!

Do you want a bonus scene from Alien Savior? Sign up for my Newsletter on this website and I’ll send you the link in December 2019’s email!