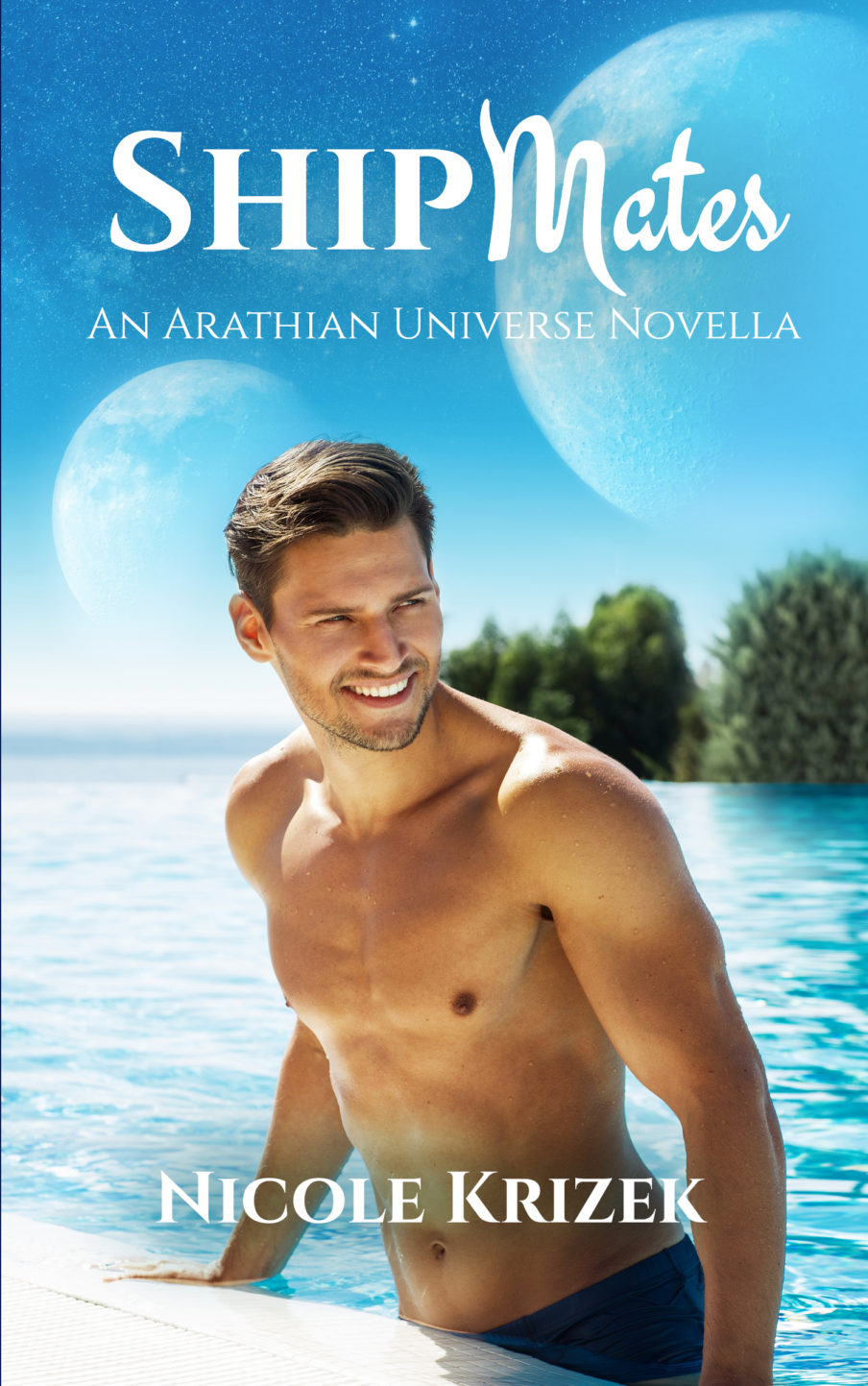 This is a free excerpt from Nicole Krizek’s novella “Shipmates.” Click here to read the entire book >>

He’d gone for a walk down the beach to think, but now his brain was incapable of doing anything but take up space in his skull. His eyes were locked onto Bilal and Lauren as they shared a heated kiss.

It was dark, but one of the moons shone brightly enough that he could see what was happening. Their hands were tangled in each other’s hair, and the kiss was deepening as he watched.

Turn away! his mind finally yelled. Apparently it wasn’t gone after all.

But he couldn’t get his legs to move. He was frozen, staring at the two people he’d lusted after for months as they plundered each other’s mouths.

He knew that he should be disappointed; he should be jealous, angry, upset… but he didn’t feel any of those things. He felt envious, and above all: aroused. He wanted to join them; run his hands through both of their hair as they kissed. He wanted to be close enough to hear their moans, and maybe even participate.

He’d had crushes on Bilal and Lauren since they’d arrived on the planet, but hadn’t made a move because he knew that he’d never be able to choose between them. Lauren was spunky, while Bilal was steadfast and reliable. Either one he chose, he’d miss the other.

That wouldn’t be fair to either of them, so he’d held off. He’d buried his feelings, and focused on anything but these two people. Now they were right in front of him, living out one of his deepest, best-hidden fantasies.

What did she feel like? Was her skin as soft as he imagined? He’d done a lot of imagining… more than his fair share. That’s what happened to a young man when he grew up in a colony that had practically no available women.

His sexual interactions were limited to men, and had been infrequent. They’d liked the bossy attitude he developed in the bedroom, but would a woman like that? Would Bilal, the man who was always so in control?

What was he supposed to do now? Pretend that he’d never seen them? Try to not picture this moment the next time Bilal worked on his boat? Forget the way the muscles in his biceps flexed as he slid his large hand up and down Lauren’s hip?

As Ian watched, Lauren straddled Bilal’s hips, causing him to stifle a groan. Her tan thighs were on either side of Bilal’s, and Ian knew that her ample breasts were pressed against the man’s chest. Ian’d had dreams about her cleavage; imagined licking down the valley that separated the twin swells.

Ian looked left then right to check for anyone else, but the beach was clear. He reached down and adjusted the fullness in his shorts, tucking the head into his waistband where—hopefully—no one would notice. It’d take some serious alone time later to relieve the pressure.

Just when he was certain that he’d been locked in place so long that it bordered on creepy, Bilal ducked his head to run his lips down the column of Lauren’s throat, and her eyes landed on him.

They widened, and Ian was sure she gasped.

Should he act like he was just passing by and had glanced at them? Should he let her know that the sight turned him on? Did he want her to know?

Should I just turn around and walk away?

It took too long for his mind to lock onto a solution. He’d been standing there frozen, and now there was no denying the fact that he’d been caught snooping. He prayed the sand opened up and swallowed him whole right then and there, but it didn’t. He remained locked in Lauren’s gaze.

And then she smiled. It was slow, sultry, and sexy as hell.

Just when he was about to smile back, she whispered in Bilal’s ear and Ian’s heart sank. He had no idea how the male would react to his perusal.

They’d grown closer since they’d worked alongside each other on the sailboat, but there was always an undercurrent of strain.

Ian held his breath as Bilal lifted his head and turned to look at him over his shoulder. His eyebrows creased—deeply—and all Ian could think was, Oh, hell. If the male was angry and got territorial over Lauren, Ian wasn’t sure what he’d do. He wasn’t lacking in the physical department, but Bilal was bigger than him, and much more muscular. If the night turned into fisticuffs, Ian was sure he’d get the shit beat out of him.

Serves me right for being a peeping Tom, he thought.

As he watched, Lauren ran her hands over Bilal, one in his hair, the other on his back, and spoke into the man’s ear. Slowly Bilal’s expression shifted, and he nodded in her direction. Her smile was bright, and she motioned Ian over.

Ian curbed the impulse to look behind him to check for another person.

When did I become so insecure? Hold your head up, dammit. If Bilal was going to kick his ass, he’d deserve it. He wouldn’t run. He’d take whatever punishment the male needed to give him.

Ian’s feet moved forward, eyes still locked onto the pair. Lauren looked excited, while Bilal was difficult to read. The male had the best poker face Ian had ever seen; he never knew what the guy was thinking. Was he aroused? Furious? Curious? Ian had no damn idea.

He stopped a couple feet away from the pair.

“Been watching us for a while?” Lauren asked in a tone he’d never heard from her. Her voice was deeper, sultry.

“Yeah, I have,” he admitted. “Sexy as hell seeing the two of you heating up the sand together.”

Lauren’s smile broadened, but Bilal’s expression remained neutral, except for his eyes which were locked onto Ian’s face. Ian would have thought him angry, except that his hands kept caressing Lauren gently.

Lauren’s eyes flew to Bilal, and finally the male spoke.

Those four words were like a bolt of lightning into Ian’s body. He sucked in a breath, and suddenly his knees were in the sand.

Bilal extended his left hand towards him, and Ian shifted forward until he was within reach. The male’s palm locked onto the back of Ian’s neck, and guided him closer with not-so-gentle pressure.

Ian’s knees made contact with their bodies, but Bilal kept urging him forward. Ian leaned, eyes locked onto the other male’s, as he brought them together. When their faces were a few inches apart, Bilal’s hand stopped pulling.

Ian knew that he was giving him the choice of whether or not to close the distance.

His eyes slid to Lauren, and she winked. That, combined with months of pining—and the fullness in his shorts—was all the encouragement Ian needed. He leaned forward the last few inches and melted his mouth to Bilal’s.

He heard a groan over the rush in his ears, but didn’t know if it came from him or the other man.

Bilal wasn’t gentle; he took from Ian exactly what he wanted, and seemed completely unapologetic. Ian loved it. He met Bilal’s pressure with his own, and brought up his hand to angle their heads for a deeper connection. He sucked on the male’s lower lip, and that time there was no mistaking Bilal’s growl of approval.

As wrapped up as Ian was in Bilal, he never forgot Lauren. His left hand went to her shoulder, then shifted onto her back. He could feel her body heat, and marveled at how close together the three of them were.

Ian felt Bilal’s muscles tighten, and Lauren was brought even closer to them. She was still straddling Bilal’s lap, but the right side of her torso was now pressed against Ian’s left. She was so close that Ian could feel her breath on his skin.

Abruptly, Bilal pulled back, and for the first time since meeting the male, Ian could read his expression. There was fire and need in Bilal’s eyes.

“Were you watching just me, or both of us?” Bilal asked.

“Both of you,” Ian admitted, and figured since he was telling the truth, he might as well take a leap. “I’ve been watching you both since you arrived. Couldn’t keep my eyes off of either of you.”

“You mean we could have been doing this all along?” Lauren asked in mock-seriousness.

She turned to Bilal. “I’d say he has a lot to make up for, wouldn’t you agree?”

The “s” seemed to slither down Ian’s spine and center in his groin. His cock pulsed in answer, and he barely stopped himself from reaching down and giving it a good rub. He couldn’t believe the three of them were actually talking about this. Now. After so long.

Of course Bilal noticed his reaction. “What do you want?” he asked Ian.

“You.” Ian switched to looking at Lauren. “Both of you.”

She snaked her hand into his hair, and looked like she was going to bring him in for a kiss, but Bilal interrupted. He wasn’t going to let him get off so easily.

Ian knew that the man wasn’t obtuse, and didn’t play games. Maybe he just wanted to hear him voice his wants? If so, Ian was happy to oblige.

“I want you both to put your hands on each other, and on me. I want to see your lips lock together, and then suck on the others’ tongue.”

Lauren’s breath hitched. “Is that all?” she asked.

Obviously she liked to hear him talk too. That was just fine with Ian; he could talk dominantly to these two all night.

“Not even close,” he replied as he brought his fingers up to lightly caress the bare skin on her shoulder.

Her skin was soft and warm, just as he imagined it to be. He knew that if the sun was shining, it’d be a beautiful tan color from her many hours spent lying on the beach in her skimpy bikini. He’d lain awake many nights thinking about that bikini.

“I want to see Bilal’s huge hands on you,” Ian answered. “I want to watch while his fingers slide over your skin, teasing at first, then adding more pressure when you beg.”

He kept eye contact with Lauren. “I want to see you peel off his clothes, piece by piece; your hands gliding over his muscles. You’d learn all of his sensitive areas for us both.”

“And what of me?” Bilal asked. His voice had deepened a degree.

Ian turned to him, and brought his mouth within a few inches of Bilal’s. “You? I want to see you lose your iron-clad control, and let yourself fucking loose on us.”