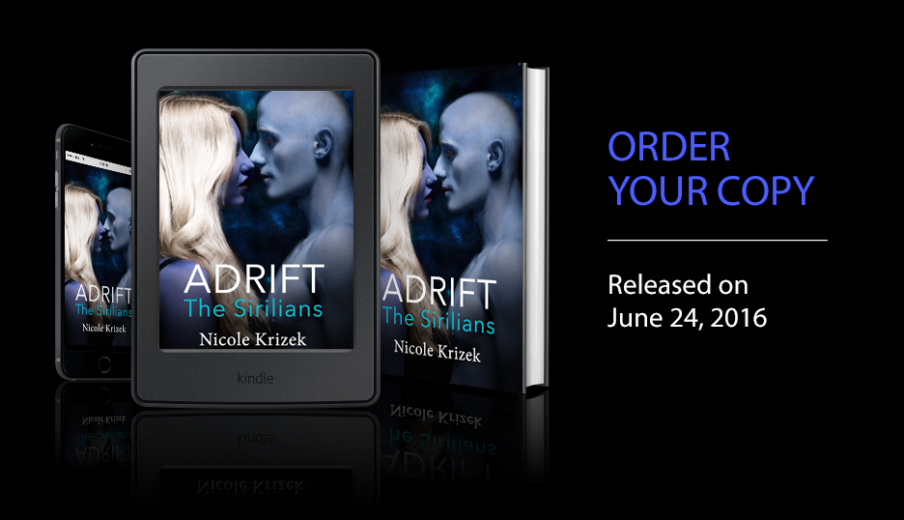 Instrumental music played in Karo’s ears. He’d hoped that it would produce a calming effect—it wasn’t working. Instead, his heart raced, sweat beaded on his brow, even his palms were sweaty.

LINK called it agoraphobia: the fear of wide open spaces. If that was true then Karo was shit-out-of-luck. You couldn’t get more wide open than the vastness of the universe, especially this part of the universe.

Karo and LINK had been traveling through a sector of space that was strangely devoid of stars. The inky blackness unnerved him, so they were traversing this sector as quickly as they could.

Unfortunately a panel on the outer hull had come loose. He’d wanted to ignore the problem and continue on as fast as his engines could carry them, but hull integrity was a serious matter. He’d been having a hard time keeping up with all of the ship’s maintenance lately, and knew that if he ignored the problem now, it could become a major hindrance later.

Karo had been forced to cut power to the engines, and was now outside of the ship floating in zero gravity. He hated this part of space travel; he avoided putting on his space suit at all costs. But—much to his dismay—there was no one else he could send to do the repairs.

He fumbled the tool he’d been holding and cursed the large gloves he was forced to wear. He reached and caught the instrument before it had the chance to float too far away. The replicator could always replace the tool, but that would involve him maneuvering back inside the ship, waiting for the replicator, then going back outside again. He wanted to finish the task as quickly as possible.

There was something very unnerving about being tethered to his ship by a single cable.

Karo ran the tool along the outer seam to seal the edges. “Done. Test it for structural integrity.”

Karo waited impatiently. He looked around at the open space surrounding them, but that only intensified his unease. It was bad enough to be exposed to the vacuum of space with only a suit to protect you, but this void was unnatural. The black nothingness taunted him.

Damn, I hate being outside the ship.

“The test showed no sign of breach. You’re free to come back.”

Karo breathed a sigh of relief. “Understood. Heading back now.”

His suit was equipped with a winch, but it was far too slow in Karo’s opinion. Instead, he pulled himself hand over hand along his tether back towards the ship’s airlock on the side of the vessel.

He was still several yards away when a beam of white light sailed over his right shoulder. It didn’t hit him, but came close enough that Karo could feel the heat the beam had emitted. His head jerked up and his stomach fell; there was a ship uncloaking close to his location.

I thought we were the only race with cloaking technology? he absently thought. Obviously his people had been wrong. The evidence of that was staring him right in the face.

The shape of the other ship was unlike anything Karo had ever seen. It appeared to be crudely pieced together from several different vessels, like a strange amalgamation of cultures.

As he watched, another beam shot from the nose of the ship, this time coming close to his right leg. He propelled into motion.

“Shields cannot be initiated until you’re inside the airlock,” LINK reminded him.

“Damn it!” Karo pulled himself along the tether as quickly as he could. Several more shots were taken at his body, but they all missed. The volley intensified in number the closer he got to the airlock. Finally he was inside and hit the control to close the outer hatch.

LINK initiated thrusters, but he felt the ship lurch with a hit. Karo braced his palm against the wall and counted the seconds as the room continued to pressurize.

The second the airlock door opened Karo tore inside and headed straight for the main controls. He flung off his helmet and began steering the ship in an evasive pattern. His eyes searched the sensors for a place to hide, for help, for anything that could be of use to them, while energy beams sailed past the ship in all sides.

“LINK, who the hell are they and why are they firing at us?”

“I’ve checked the database but their ship looks to be comprised of pieces from many vessels. It will be impossible to positively ID them solely based on that.”

“Let’s see if we can get them talking to us.” Karo opened a wide channel of communication. “This is Karincin Abishek of the planet Siril. I mean you no harm.” The ship lurched with another hit, as if to contradict his words, but there was no reply.

“Understood, but it will do little good.”

Their cloak was next to useless when a vessel was already tracking their ship. They’d still be able to see the engine’s energy signature and follow that path just as easily, but Karo had a theory.

“I think they’re using us for target practice. If novices are at the weapons then maybe the cloak will give us a small advantage.”

He continued to rapidly weave through space—for once wishing that his ship had weaponry—and immediately the white beams were shot farther and farther away from his vessel. There was a moment of hope, but it was short-lived. His ship lurched as something ricocheted off of his hull.

Now they knew where he was, and were using more powerful weaponry.

The ship was struck again, this time hitting the broadside full-on. Karo was thrown from his command chair and slid across the floor to impact the far wall.

He pushed himself onto his hands and knees and was relieved when nothing was broken. He felt a stab of pain at his ribs but pushed through it to stand.

“Maybe a little,” he amended, holding his side.

Another projectile hit the ship, but he was able to catch himself against a wall and walk back to his chair. His console was alight with alarms and warnings. Systems were failing rapidly, and as he watched, the shields went down.

Panic barely registered in his mind before his ship was hit again, this time directly in their aft. Karo caught himself on his seat, but knew that things were at their worst.

“Can we get it back online?”

“No. The engines have been completely destroyed,” LINK told him solemnly.

Karo’s stomach sank as he saw the enemy ship right atop them. Think! What can I use? He quickly scanned his consoles. The engines were gone, environmental systems were failing, but he still had the ship’s cloak—which was still engaged—and energy reserves to keep it powered for as long as he needed.

The problem was that his propulsion signature and debris field led a clear trail to his ship. Even cloaked, the enemy would be able to find them based on their projected path.

“We need to steer the ship!” he thought aloud.

“But, we have no engines,” LINK argued.

Karo moved quickly, dodging debris that littered the interior, until he got to the door of the airlock. The ship jolted with small weapon fire, as if they were using it for target practice again.

“LINK, put a containment field around the aft to contain any debris that’s falling off. We need to stay invisible.”

Karo only had to wait a moment.

“All debris is contained.”

He held his breath and engaged the airlock’s outer doors.

Compressed air was sucked into the vacuum of space, and though it wasn’t much, it gave them enough of a push to change the ship’s course. Karo brought up an exterior view on his wristunit and watched as the enemy ship fired on where he’d just been. Their shot missed and continued into space. They fired several more missed shots along the path his ship had been traveling, but none came close to hitting him. They stayed close by for several minutes, then gave up the hunt and left.

Karo’s back hit the wall and he sank to the floor, overwhelmed with relief.

Karo nodded, knowing that LINK could see him on the interior cameras. He heard a pop come from the front of the ship, then LINK’s voice.

“Sir, that was the last of the environmental system. I suggest you put on your helmet before making repairs.”

Karo looked at the bulky gloves that were on his hands. He was still wearing his spacesuit, which would protect him for a while.

“Okay.” He forced himself to stand. He may have lived through the initial attack, but now he needed to make sure that he continued to survive. He made his way through the ship and found his helmet against the far wall, where it’d been flung during the volley of hits. He put it on and got to work.